In this post, I explore a solution to FiveThirtyEight’s Riddler problem from March 27th. In this problem, we are asked to consider a process in which we repeatedly roll a fair die in batch rounds of size equal to the number of sides on the die. After each round, the die is relabeled using the outcomes of the batch’s rolls. Eventually, all faces of the die will receive the same label and we’re asked: on average, how many rolls will it take before the die’s faces are all the same?

The notebook for this post may be found here.

For reference, here’s a verbatim copy of the prompt that we will be working on (copied directly from FiveThirtyEight’s site):

You start with a fair 6-sided die and roll it six times, recording the results of each roll. You then write these numbers on the six faces of another, unlabeled fair die. For example, if your six rolls were 3, 5, 3, 6, 1 and 2, then your second die wouldn’t have a 4 on it; instead, it would have two 3s.

Next, you roll this second die six times. You take those six numbers and write them on the faces of yet another fair die, and you continue this process of generating a new die from the previous one.

Eventually, you’ll have a die with the same number on all six faces. What is the average number of rolls it will take to reach this state?

Extra credit: Instead of a standard 6-sided die, suppose you have an N-sided die, whose sides are numbered from 1 to N. What is the average number of rolls it would take until all N sides show the same number?

Before digging into the solution, I’ll give a brief illustration of the dice rolling process. In the following visualization, I’ll first show the initial dice labels (i.e. 1–6 at round 0) followed by the random dice labels obtained after each subsequent batch of rolls. The figure will only update when the outcomes of the current round differ from the outcomes in the previous round. Also, the dice labels will briefly flash green when the process ends before starting over.

To begin, we’ll introduce a concept that we will use to specify the states of the Markov chain that we use to solve the prompt problem.

To obtain the mean time until the die has all equal sides, we simply need to find the mean time to absorption when the process starts from a die with distinct side labels. Denoting by \(P\) the transition matrix for this Markov process, we can obtain the vector of mean absorption times \(\mu\) by solving

where \(R\) is the submatrix of \(P\) obtained by deleting row and column corresponding to absorbing state \([n_{sides}]\), and \(\mathbf{1}\) is a column vector of \(1\)’s with the same number of rows as \(R\). The vector \(\mu\) gives the mean time to absorption from each state of the Markov process, but because we are only interested in the mean time to absorption from a die with distinct labels, we only need the entry in \(\mu\) corresponding to this state.

We will need to compute the transition matrix \(P\), and then solve for the vector of mean absorption times.

The following functions are used to generate the uniqueness types for a die of side \(n\).

As an example, here are the uniqueness types for a \(6\)-sided die:

The following function is a helper function used to generate all of the unique permutations of a list with repetitions, which allow us to generate the set \(\Gamma\) described above.

Functions to Compute the Transition Matrix

We’re now in a position to compute the transition probability matrix \(P\).

Below we plot the transition matrices for 2 – 6 sided dice. 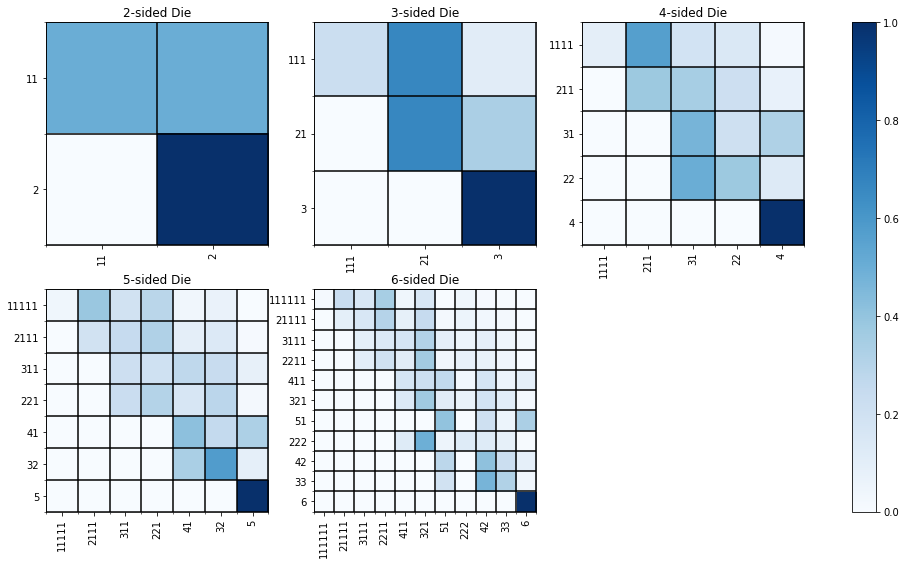 The results are displayed below in the Final Results section.

In this section, we simulate the relabeling process. The simulation is straightforward, so I won’t provide too many details.

Helper function to check if sides are equal

The following function will be used to check to if the sides of a die are all equal or not.

The following two functions are used to simulate the rolling process.

Now we simulate the process for dice with 2 – 10 faces.

Note: I don’t bother to set a seed for reproducibility in this code since I’m running this with multiple processors, which will return results in a truly random order. As such, I can’t guarantee exact reproducibility.

In this section we compare the simulation results to the exact results.

Finally, a plot of the results: