FiveThirtyEight’s Riddler problem for last week asked if it was possible to take a road trip in which you visit every continental US state without ever having to cross over the same border more than once - although returning to the same state is allowed. In this post, I’ll show that this in fact possible, and I’ll also provide a solution which only passes through each state exactly once.

The prompt problem can be viewed more abstractly as a question about identifying whether a Hamiltonian path exists on the continental US state border adjacency graph. Likewise, the question of whether it is possible to visit each state without returning to a state more than once can be recognized as a traveling salesman problem.

It turns out that you can pretty easily solve the prompt problem by hand (which I only realized after thinking quite a bit about the initial prompt), so I will begin by providing a hand-traced version that I was able to find. After that, I’ll discuss an optimal path that I found using simulated annealing. I should note though, if you print out a copy of the state border adjacency graph that I provide below, it wouldn’t be very hard to trace out an optimal path by hand.

Typically, I like to solve Riddler problems computationally with a view toward generalization, and in a manner which lends itself to interesting visualizations. However, it often happens that these puzzles can be easily solved by just picking up a pen and paper, which I ended up doing “first.”

In reality, “first” means that I only tried a by-hand solution after spending a bunch of time collecting shapefiles, adjacency graphs, setting up some rudimentary plotting tools, and reading about Hamiltonian paths and techniques to identify them. If I had actually traced out the solution by hand first, then I likely wouldn’t have bothered to make this post (:

The path for my by-hand solution was:

which looks as follows: 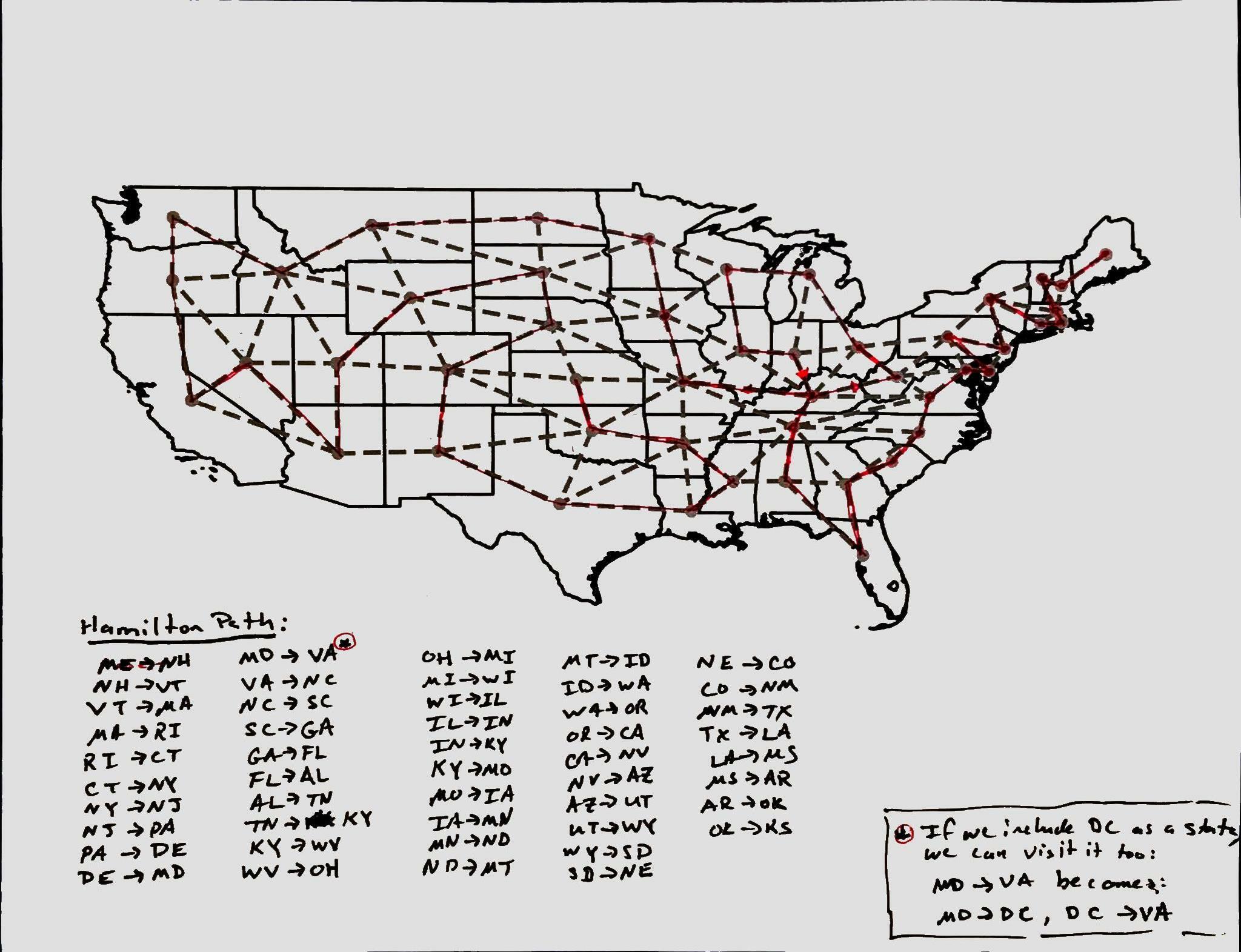 As indicated in the introduction, if we require that our road trip must only visit each state once, then we have turned the problem into a traveling salesman problem on the continental US state border adjacency graph. Although there are many ways to tackle this type of problem, I figured that I could make some interesting visualizations if I approached this problem using simulated annealing.

The following image depicts the graph. In this plot, each state is represented by an orange node (plotted at the state’s centroid), and the graph’s vertices are represented by blue line segments connecting adjacent nodes.

The following image shows the graph distance between all of the continental US states. In this image, the color of each square represents the distance between the states in that row and column. From this graph, we can see that states like Maine and California are very far apart from one another, with 11 border crossings required to travel between them. 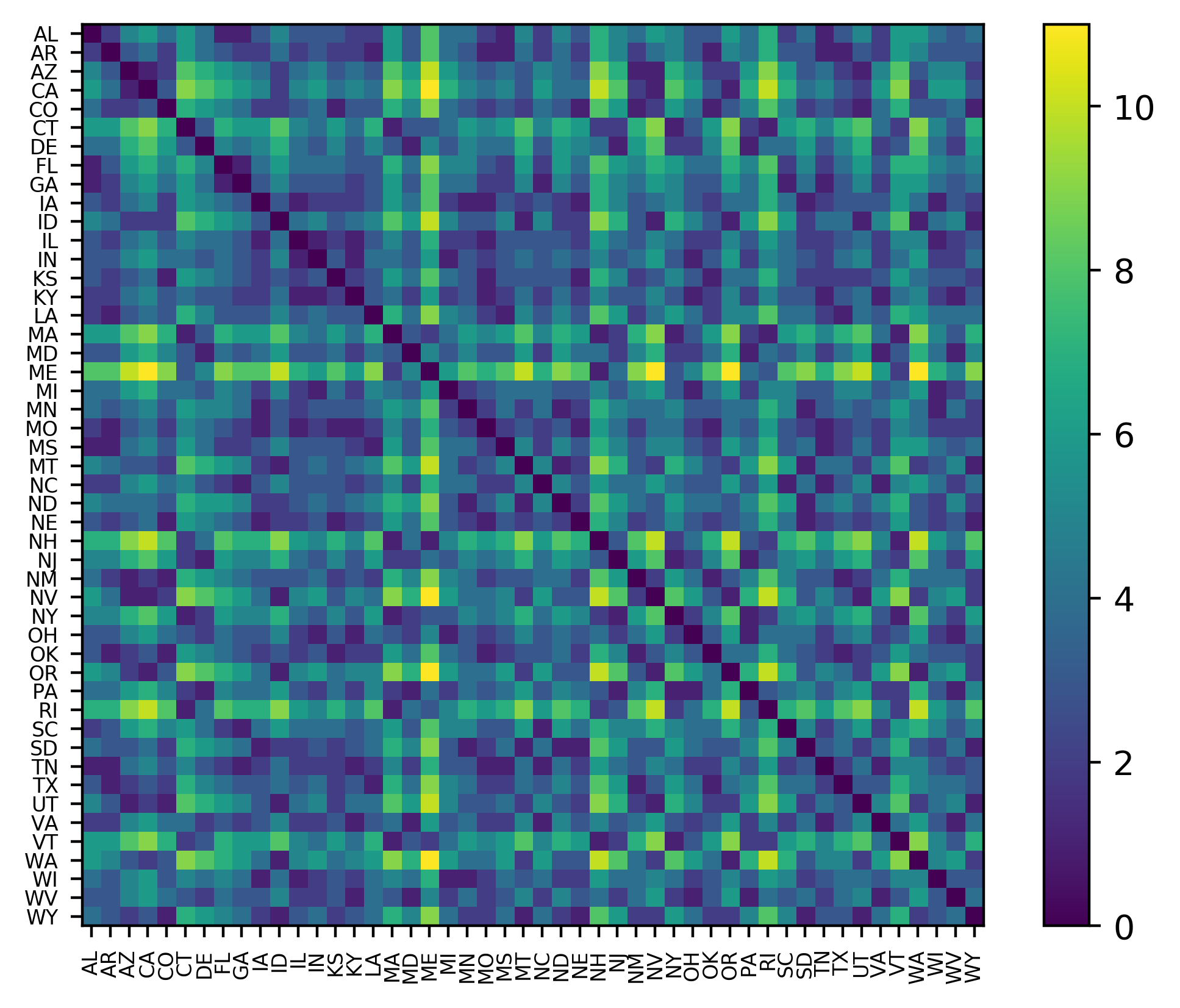 Simulated annealing is based, in principle, upon the way that atoms settle into low energy states as a material is slowly cooled. In this algorithm, the objective to be minimized (in our case path_length) serves as an analog to a system’s energy in material cooling. A temperature parameter is introduced that is successively reduced as the algorithm proceeds, which plays an analogous role to a real temperature when slowly cooling a material. At each step, candidate solutions are randomly generated that are near to the current candidate solution, which mimics the process of atoms randomly jostling around in a cooling material. The algorithm must then decide whether to adopt the updated configuration or not. If a candidate reduces the objective, it is always accepted. On the other hand, if a candidate increases the objective, the algorithm will randomly decide whether to accept it in a manner that depends upon the current temperature. Initially, when the temperature parameter is high, the algorithm will have a relatively high probability of adopting an inferior state, but as the algorithm progresses and the temperature parameter is decreased, the likelihood of accepting an inferior state is also reduced. This property (of occasionally selecting worse configurations) allows the procedure to randomly jump out of local minima and helps the algorithm to trend toward a global minimum.

The simulated annealing algorithm that I used essentially follows the procedure outlined in Numerical Recipes in C, Chapter 10.9 to (approximately) solve the traveling salesman problem. The only real difference between that implementation and my implementation is that theirs requires the path to terminate at its starting point, while mine lets the path end at any node.

The following animation shows the candidate paths that were obtained after each temperature reduction in the algorithm. For each step, the best path length that the algorithm has seen up to that point is displayed.

In the end, the optimal path that I found was:

which looks as follows: