In this post, we consider a sports league transitioning from their old draft pick strategy, where teams picked in reverse order to their win rank in the last season, to a new draft pick strategy based on rolling a \(T\) sided die to assign teams to \(T\) groups. These groups are ordered, with teams in the first group getting to pick before those in the second group and so on. Within each group, draft pick orders are assigned using the old strategy.

The motivation in this post is to solve the FiveThirtyEight “classic” riddler problem posted here. I’ll work out the solution to the problem and then simulate my results as a sanity check.

The code which generated this post can be found as a Jupyter notebook.

You are one of 30 team owners in a professional sports league. In the past, your league set the order for its annual draft using the teams’ records from the previous season — the team with the worst record got the first draft pick, the team with the second-worst record got the next pick, and so on. However, due to concerns about teams intentionally losing games to improve their picks, the league adopts a modified system. This year, each team tosses a coin. All the teams that call their coin toss correctly go into Group A, and the teams that lost the toss go into Group B. All the Group A teams pick before all the Group B teams; within each group, picks are ordered in the traditional way, from worst record to best. If your team would have picked 10th in the old system, what is your expected draft position under the new system?

and all we have to do is compute these terms.

Since the mean of a binomial random variable is just \(p \cdot n\), we find:

Putting it together (solution for a possibly loaded die):

Solution to the Riddler (no extra credit):

Then, our new expected draft pick is:

So, we can expect to get a worse draft pick this season.

Implement the analytical solution described above, just for the fair coin.

Now we’ll simulate the process as a sanity check for the solution given above.

Wrap comparisions up into a nice tidy little function:

Let’s check that our analytical results agree with our simulations.

Good! Our computations seem to agree with our analytical results pretty well.

Examining the distribution of draft picks:

We’ll simulate a lot of draft picks for each \(T\) and plot the corresponding histograms. 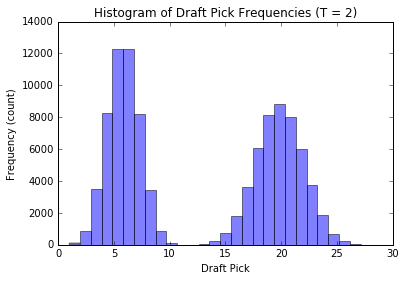 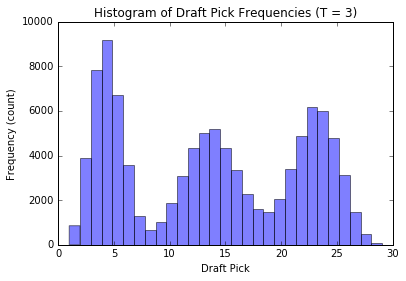 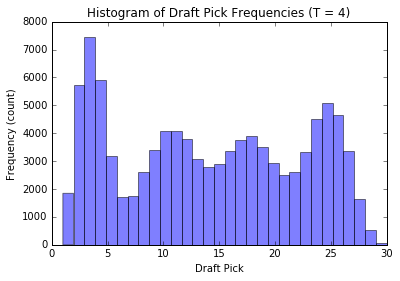 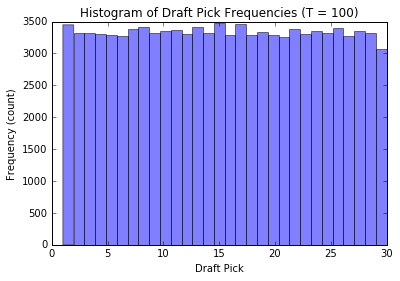 We see that when there are \(T\) groups, the histogram essentially follows a \(T\) modal distribution (see analytic discussion above, this is not unexpected, the reasoning is similar to our observations from before). Also, as \(T\) gets large, the distribution of our pick assignment tends toward a uniform distribution. Basically, the more groups to distribute the teams in, the less effect our old-style order has on the outcome, and our assignment becomes increasingly random.